This is a book blog, why tf are we talking about movies and…who?

Because it’s Valentine’s Day and love reigns and our eternal MCM is Sir Peter Ustinov, so what better time—book blog or not—to write a little love letter to bae?

The five films below are our favorites out of SPU’s enormous body of work (would’ve been six, but apparently Hammersmith is Out isn’t on DVD or any streaming service, lame.) But first, a mini-miniature biography as told by our own intrepid (*cough* boy crazy *cough*) librarian Host:

“Sir Peter Ustinov, born April 16th, 1921 lived a full life as a writer, actor, director, soldier, polyglot, humanitarian, comedian, lover, father, son, perfect, holy, sovereign, Oscar winner, author, documentarian, special envoy to the United Nations, president of the World Federalist Movement, university Chancellor, EGOT in my heart because he was robbed at the 1958 Tony’s twice-over for Romanoff and Juliet, novelist, and composer who will one day Ghost-and-Mrs.-Muir me if I keep the faith. And I will always keep the faith. He passed from this life on March 28th, 2004.”

Wow. Thanks for that. Good job, Host, well done. No one’s going to top that so here are the movies in reverse chronological order:

We have nothing but love and the utmost respect for every actor that has sank his teeth into the role of Hercule Poirot, one of the best detectives in literature, but hands down Sir Peter is the best. Evil Under The Sun is the best of his turns and such an entertaining, romp-y vacation of a movie with one of the best casts in a Agatha Christie adaptation ever. Roddy McDowell and Diana Rigg have so much fun, they’re a joy to watch as are all the rest.

What is says on the tin. For better or worse, Blackbeard has become a romanticized figure in pop culture, and it’s always a good time when he turns up.  (even when he’s foul—looking at you Pirates of the Caribbean 4.) Scoff if you will, but there are some classic plot elements here that are well done. Vengeful ex-wife witch whose spell can only be broken by a good deed? Who hasn’t been there? Also, peep the sets and fan favorites Richard Deacon and Herbie Faye. 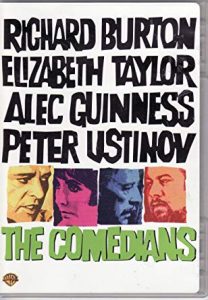 Graham Greene reportedly regretted penning the adaptation of his work himself, but there’s so much that’s great about The Comedians you don’t have to work too hard to get past the (admittedly many) not-great elements. Set in Haiti, the movie was filmed in Benin for safety reasons related to political terrorism and you see much of the beauty of the West African coast. It’s nauseating to see the incredible performances by black actors in this movie (as in all movies of this time) knowing that that talent has been hidden, ignored, downplayed, and silenced for nearly one hundred years in film. (Polite reminder to put your consumer dollars in the pockets of black and POC artists and entertainers. Think what the world would look like if our grandparents had done so.)

Last but by no means least is The Sundowners. Notorious SPU is one of four main characters in a deeply moving family drama, and despite being the funny man pours out a complex and poignant performance against the backdrop of rugged Australia in a time of change. One of Robert Mitchum and Deborah Kerr’s best in our opinion, too.

Thanks for taking this very sentimental journey with us, off topic but from the heart as it is. We always want to hear from you!

I Read Therefore Book Blog and Reading Resource is a participant in the Amazon Services LLC Associates Program, an affiliate advertising program designed to provide a means for sites to earn advertising fees by advertising and linking to Amazon.com